“Bryant Martin is a wonderful Curly. His cheeky grin and confident swagger bring his charming cowboy character to life. His fantastic voice reverberates throughout the theater from his opening number of “Oh, What a Beautiful Mornin’ ” directly into “The Surrey With the Fringe on Top,” and straight through to the “Oklahoma!” finale.
– Kristen Weyer, DC Metro Theater Arts 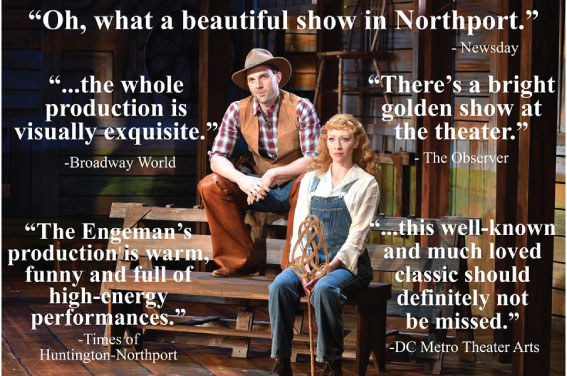 Newsday Oklahoma! Review:  Oh, what a beautiful show in Northport:

” …not even Curly’s “Surrey With the Fringe on Top. It’s hard to imagine another song that could follow “Oh, What a Beautiful Morning,” which opens this groundbreaking Broadway classic. Martin leads both numbers with a voice you’d swear could be heard all the way from the title territory to Northport. Or at least to Kansas City”.
-Steve Parks, Newsday

Observer Review: There’s a bright golden show at the theater:

” And, as I sat through Oklahoma! at the Engeman Saturday night watching Mr. Martin portray the iconic character Curly McLain, and angelic Kaitlyn Davidson portray the love of his life Laurey Williams, I soon came to realize why my mom loved this show so much, and why she was so fond of live theater.”.
-David Ambro, The Observer

All Aboard for Pioneer Theatre’s “The Last Ship”:

“The main character, Gideon Fletcher, was played masterfully by Bryant Martin. His voice is so clear and solid that I heard a few audible gasps of delight around me as he finished the song “All This Time.”
–Maren Scriven, Utah Theatre Blogger’s Association

While the sole female lead, Stephens, has a lovely voice, she is overshadowed by the majesty of vocal performances of Martin, Castree, Sharkey and Jellison. And that is reason alone to see this production.”
–Blair Howell, Broadway World.com

Pioneer Theater’s ‘Last Ship’ has a slow-moving story, but a sensational score:

“The very likable and remarkably talented Bryant Martin, who stars as Gideon Fletcher…  Martin’s swagger and boyish charm are swoon-worthy, as is his musical talent. ” -Heather Hayes, Desert News

AST creates ‘Beauty’ and joy in bringing Disney to life:

“As Rich, Bryant Martin has the spunk of an All-American and deftly communicates his growing disillusionment observing the real cost of war.”
–Lew Whittington, Huffington Post

“First Date” well worth a second:

“Parks and Martin are the quintessential Laurey and Curly, to consistently root for. ”
-Don Grigware, BroadwayWorld.com

” Bryant Martin and Madison Claire Parks (granddaughter of the famous actress Betty Garrett) are splendid as Curly and Laurie. Both have full rich voices, and they make a lovely, good-looking, couple.”
–Robert Machray, Stage Happenings.com

Critical praise for Martin’s performance as John Paul Jones in “Pleasures and Palaces”:

“Bryant Martin, who impressed as Curly in Oklahoma! and as Thomas Jefferson in 1776 in 2012, plays the priggish Presbyterian John Paul Jones as a overly staunch boy scout.”
–Gregory Sullivan Isaacs, Theatre Jones.com

Critical praise for Martin’s performance as Thomas Jefferson in “1776”:

“Bryant Martin is an example of luxury casting in the role of Thomas Jefferson. He did his expected excellent job in the role, but we didn’t get to experience the full range of this fine singing actor as we did when he played Curly in Oklahoma! last season at Lyric.”
-Gregory Sullivan Isaacs, TheatreJones.com 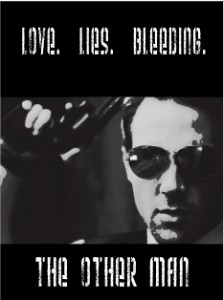 Critical praise for Martin’s performance as Tom Donaghy in “The Other Man”:

“Not only does Martin’s Donaghy sport a tangy cockney accent with generous amounts of rhyming slang; he can be violently threatening one moment, barking orders in a booming voice; funny and sexy the next, gently but confidently flirting with a woman he’s just met; and then crushingly sensitive, recalling his early years in an orphanage. Martin melds it all into an impressive performance.”“But it’s watching Martin bringing his own script to life with relish that gives the show its raison d’être.”
–Ron Cohen, Backstage

“The famous London revival of Oklahoma!  a decade ago had a big star, Hugh Jackman, as Curly. His singing, however, makes the cast album unlistenable. Lyric’s Curly, Bryant Martin, isn’t famous. But he’s about as good-looking as Jackman and sings 100 times better.”
–Lawson Taitte, Dallas Morning News

“A bold and manly Curly, Martin’s rich tenor voice moves easily from a buoyant, imaginative rendition of “The Surrey with the Fringe on Top” to a tender duet with Frazier in “People Will Say We’re in Love.” How can any woman resist this marvelous man?”
– Martha Heimberg, TheatreJones.com

“Same thing for Martin, who’s a smart and irresistibly good-looking Curly. Best of all, he takes the vocals of the role almost to operatic heights, hitting every note with pitch-perfect clarity”
.– Mark Lowry, DFW.COM

“Very rarely does a show reveal its fate within the first three seconds. Rarer still is when that fate rests squarely on the shoulders of one performer, an actor whose job it is to enchant the audience within the time it takes to sing a single word. In this case, the word is “There’s”—as in: “There’s a bright golden haze on themeadow” from Oklahoma’sopening number “Oh, What a Beautiful Mornin.’” By the time the actor playing Curly has sung that sentence, the audience has usually received a pretty solid indicator of where their production will be heading. At Lyric Stage, as soon as Bryant Martin sings the opening syllable the answer is clear: we are in for a beautiful time.”
–Lindsey Wilson, D Magazine

“Mr. Martin’s performance could only be described as wonderful. His perfectly paced take on this southern cowpoke was sassy but also gentle and genteel. His voice was stellar and he brought new life to standards like “Oh, What a Beautiful Mornin’” and “The Surrey with the Fringe on Top.”
–Ashlea Palladino, The Column

“Lanky, ebullient Bryant Martin swaggers onstage in his batwing chaps, toting a Western saddle like a postage stamp, wooing every romantic in the house with his soaring, simple delivery of the signature opening song.”
– Alexandra Bonifield, CriticalRant.com

“When Bryant Martin, as leading man Curly, strolls on at the top of the first act, crooning “Oh, What a Beautiful Mornin’,” he’s the ideal dreamboat, the one every R&H musical deserves.”
– Elaine Liner, Dallas Observer